The Catoira City Council has just installed new exhibition resources in the Cultural Activation Center (CACTO) in the presence of Mayor Alberto García. It is an information panel on the Visigoth period, together with a replica of a coin stamped in Catoira, and another panel on the “rolled sign” that Archbishop Xelmírez used to authenticate his documents.

At the end of the 6th century, the Visigoths expelled the Swabians and turned Galicia into a Gothic province. At that stage there are indications of the presence of a mint in Catoira in which coins could be minted. Now you can see in the CACTUS the replica of a gold coin from the time of King Witericus (603-609) that bears the word CATORA inscribed on the reverse.

The panel above Xelmírez’s signature graphically reproduces the characteristic “rolled sign” used by the archbishop since 1115 as a symbol of authority in his documents. 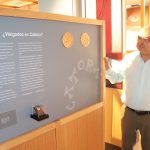 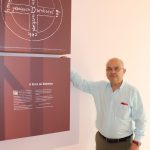