Every year, the inhabitants of Catoira recalls the time when people fought for the defence of these lands against the viking attacks. Since its first edition in 1960, the Romaría Vikinga has converted this fight into a celebration in  which the attack to the Torres de Oeste fortress carried out by northern warriors is pacifically reenacted. This festivity is one of the most well-known and remarkable events. It was recognised as Festival of National Tourist Interest in 1988 and Festival of International Tourist interest in 2002.

This great profane celebration went through three different stages concerning its development and organisation, from its establishment to the evolution into the hallmark of Catoira.

The poet and priest Faustino Rey Romero from Rianxo and the poet Baldomero Isorna Casal, founders of the artistic and literary forum Ateneo do Ullán, were the starters and the primary responsible for this celebration, which was funded with the contribution of its members. It is necessary to highlight that important personalities from arts and literature took part into the activities carried out by the forum: Fermín and Luís Bouza Brey, Xesús Ferro Couselo, Ramón Otero Pedrayo, Rafael Dieste, Luís Seoane, Álvaro Cunqueiro, Camilo José Cela, etc.

In 1960, the Ateneo do Ullán dramatised an “auto sacramental” (Spanish religious act) based on the viking attacks to Galicia. It was so successful that they decided to reenact these facts every summer in the Torres de Oeste area, holding a picnic lunch for the neighbours afterwards. Since 1961, it  started to be celebrated as a “festive pilgrimage” (Romaría), until it started to be organised by the local company Cedonosa.

During this second stage, due to the renown the celebration achieved in a short period of time, the previous promoters decided to hand the organisation over to the local company Cedonosa. Thus, thanks to the economic support of both the company and its workers, as well as of the Council of Catoira since 1988, the festival managed to reach more relevance and importance. During this stage, the date of the celebration was finally scheduled for the first Sunday in August.

From the start of the nineties, the Cedonosa workers are overwhelmed by the significance and relevance reached by the Romaría. For this reason, it was necessary to renew its program, restricted to a reenactment of a viking landing by that time on a first Sunday in August and a typical music festivity on the Council boulevard. The local government assumed the organisation and promotion of the event, being aware of its potential. The Romaría would become a hallmark of Catoira and it would also contribute to its national and international projection. Thus, a new period started, with new activities which conferred a strong cultural character  to the six-day celebration.

The Viking Festival is held during the first week in August. The reenactment of the Viking landing in the Torres de Oeste area, which is celebrated on Sunday morning, is, without any doubt, one of the strengths of the celebration. This reenactment was started in 1968 and by that time a sand barge was used as “drakkar” as it was ornamented with viking motifs. In order to enrich the celebration, the Council of Catoira decided to build an authentic drakkar. The relations with the town of Frederikssund made possible to access the maps of a real viking ship which was found at the Roskilde fjord, also preserved at the Viking Ship Museum of the same location.

The Council of Catoira ordered to build the first boat, which would become the main character of the Romaría Vikinga, at the town’s vocational school. The drakkar named as “Torres de Oeste” is a replica of the Skuldelev 5, a small warship of the XI century. It is 17,5 m in length and 2,5 wide, with capacity for 13 pairs of oars, 6 tonnes of freight and for a crew of 30 people. The ship reaches a speed of 15 knots.

In 2008 a new drakkar is included, named as “Frederikssund”. The Council of Catoira built this new ship in order to reply to the demand by people who wants to take part in the “attack” to the Oeste fortress every year and to enrich the reenactment even more. The new ship was named with the same name as the Danish town twinned with Catoira since 1997. The “Frederikssund” combines constructive elements inspired by the Oseberg ship. The result is a unique viking ship with a length of 20 metres and a width of 2.9.

The viking attack to the Torres de Oeste fortress includes the reenactment of the resistance on land. Nearly 200 hundred people take part in this activity and the celebration also includes a medieval market, parades, live folk music, typical wine and mussel tasting, popular festivals, etc. The Romaría Vikinga Program counts on  a wide range of cultural activities which are carried out during the week prior to the reenactment of the viking landing, including live concerts, exhibitions, book presentations, seminars and sports competitions.

In 1994, the Council established the “Romaría Vikinga Theater Week”, as the result of the brotherhood process with the Danish town of Frederikssund, with great viking  tradition. There, a Viking Festival is held every year, including a theatrical performance about viking issues, played by local inhabitants.

In 1993, a group of 200 people from Frederikssund played one of these theatrical pieces in Catoira during the Romaría Vikinga celebrations of that year. It was so successful that the Council of Catoira decided to include a similar activity in the program. In addition and with the aim of promoting the performing acts in Catoira, the Council created the “Theatre Prize Romaría Vikinga”. The awarded pieces during this biennial contest are elected for being performed during the Theatre Week of the following years. Since then, several institutional visits have been executed and joint bilateral activities have been carried out, together with different exhibitions about nordic issues or theatrical plays in charge of international associations.

Viking dinner and night of light

Viking dinner and night of light

The Viking Dinner takes place during the Saturday evening, prior to the day of the Viking Landing reenactment. This is a fun celebration where approximately 1500 diners wearing typical medieval clothes taste traditional food.

After the Viking Dinner and foreseeing the excitement of the Viking Landing, a fireworks show is carried out at the Torres de Oeste venue. This is an event of great visual and sentimental impact which calls upon peace and brotherhood between peoples. Hundreds of guests join the dramatisation of the spell for the typical Galician beverage called “Queimada” and carry some torches.

Music has always been present at the Romaría Vikinga. In 2007, in order to enrich its cultural program, the festival VIKINSONS was established.  Important Galician rock and folk bands have played in this festival. This event takes place in the boardwalk of the river beach during the Saturday prior to the reenactment of the Viking landing. Free access.

The Council of Catoira establishes the rules for the organization and development of the Romaría Vikinga market 2019.

During these last two decades, the Romaría Vikinga achieved a greater extent, projection and importance, so that the cultural activities gained also more influence within the festive program.

Since 2014, the Council of Catoira is a member of Destination Viking Association (DVA), which manages the Viking Cultural Route of the Council of Europe, a new concept of tourist development. Members from different European countries work together with the aim of developing a tourist destination without borders based on the Viking heritage.

The Council of Catoira is involved in the project “Follow the Vikings”, implemented by DVA in 2015, which counts on the financial support of the European Union, with a grant of 1.96 million euros within the cultural programme Creative Europe.

The project has a duration of four years (2015-2019) and has 15 partners from eight countries (United Kingdom, Iceland, Ireland, Sweden, Denmark, Finland, Norway and Spain). The project aims to enable the accessibility and understanding of the viking heritage internationally and also to sustain and to boost the economy and development of the participants agents, as well as promoting Europe as a main destination for tourists. In addition, the expansion of the involved cultural agents network is being carried out in order to preserve, introduce and sell the Viking heritage internationally, including knowledge exchange and experience sharing amongst its participants.

The project also involves the celebration of seminars and meetings between the partners. Catoira held a seminar about presenting the Vikings from a European perspective in May 2016.

An important aspect of the program is the creation of a viking roadshow which will travel throughout 12 key locations in Europe. The show arrived to Catoira on 2 and 3 August 2018. It includes viking arts and craft demonstrations and a great audiovisual show which combines drama, poetry, history, music, dance and reenactments. 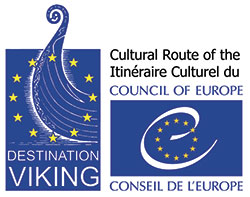